Stay in touch with us! 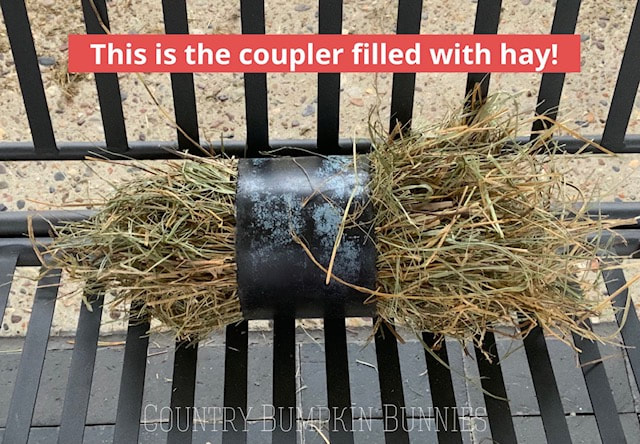 Hay is a necessity for rabbits.  It is said that it should make up 3/4 of a rabbits diet. So hay is a critical staple in their daily diet and they need to have unlimited fresh hay at all times.  Most people say you need to feed only Timothy hay.  Timothy hay is great if you have access to it.  Sometimes the only option is to buy it in the compressed bales at Tractor Supply.  However, that is not the most economical way if you are running a rabbitry of significant size.  At this time it is almost $20 for that option.  I like buying fresh cut hay from farmers! I can get it for $4- $5 a square bale.  I make sure there is no alfalfa in it first.  Then I try it out on my rabbits.  If they all do well on it, I know that is my source.  We have moved around so much that I have been through this process many times! I have fed meadow, peanut, orchard, timothy, just grass hay in general and never had a single problem.  You just need to watch for mold, soiled hay or anything that looks questionable.

Next is an issue all breeders seem to face as well as pet owners.  IT'S SO MESSY! So what is the best way to keep and feed hay to bunnies? It makes a mess in a barn, garage and most definitely makes a mess in the house! Is there a solution? The answer is, unfortunately, not really. I have tried so many different things.  I'm going to go through some of them right here.

I bought plastic cat litter pans and filled with hay and put them in the rabbit cages for each rabbit to have one.  It served two purposes.  First, it was filled with hay to use as bedding on cold nights, they loved this!  Then it was fresh every day and they would sit in it and munch all day long.  There are pros and cons to this idea.  The good is the obvious I have mentioned already.  They really did love it.  However, some would soil it so quickly that they made a mess of themselves in the process.  With a wool breed, this is not the best option.  I also wasted a lot of hay going this route. Then, to top it off, about 75% of the rabbits chewed the plastic pans if they ate their hay too quickly.

I had moments where I just grabbed tons of hay by the handfuls and tossed it in the cages. This was the easiest and the messiest.

One day I was at Lowes and started my way to the garden section.  I passed by an isle of these THINGS that I did not know what they were but I had a lightbulb turn on the moment I saw them.  They appeared to be some sort of plumbing part.  What do I know...absolutely NOTHING about plumbing! However, I knew rabbits and I thought it looked like the perfect gadget to shove hay in and feed to the rabbits.  They were cheap and there were lots of them available. So I filed my cart with them and took them home.  My dad comes by and says "what are you going to do with all of those coupler fittings?".  I had no idea what he was talking about.  Now, years later,  I forced myself to look them up so I could take a picture of them and let you all know what I am talking about (pictured below and it is linked to Lowe's if you click on photo).

So this "corrugated snap coupler fitting "  seems to be my go to for hay because the little ridges on the inside help hold the hay tightly and the size is perfect for filling and lasting a couple of days for each bunny. They are plastic so that is the only downfall.  If you have a rabbit that likes to play with their hay, they can pull it all out at once and make a huge mess.  Otherwise, I love using these things.   There is absolutely no mess free way of haying a rabbit but this one is my favorite. Below I have a picture of an old coupler filled with hay so you can see what it looks like. These are four inches in diameter. Perfect size!

Now there are always more destructive bunnies and for those, I have other options for hay feeding. One is a piece of PVC pipe shown below. My PVC pipe is smaller in diameter but they are just scrap pieces I found on the farm and cleaned up.

Last but not least at all is our hay racks that I now make for our buns. These attach to the side of each cage.  The mess stays on the outside of the cage.  It isn't fun to clean up the floor every day but it is better than hay getting wet or ruining a bunch of fiber/wool on one of my angoras.  I purchased some similar to these from a rabbit supply company and couldn't remember who.  I know I paid at least $5 a piece for them and they were smaller.  When I decided that I liked them and wanted more, I just bought supplies and made them myself.  To see more about how to make them, here is a step by step process of how to make a homemade bunny hay rack!

The one pictured above is a larger hay rack.  It is a foot wide and 7 inches tall, three inches deep.

Hi! I'm the heart behind every bunny you see on this website. I fell in love with these fluffy babies and had to have them. I socialize them and spend time with them every chance I get. Occasionally I feed and clean but I'm usually caught slacking on that part of the job and excelling at snuggling them 100% of the time.

I am the chief groomer, cleaner and feeder. I TRY to leave the snuggling to the kids although these sweet fur balls have become a quick obsession of mine. I find myself giving bunny kisses often. I take the blame for the excessive number of bunnies we own lol.

I'm the errand boy. Anything they need, I go get it. I pick up about 600 lbs of feed and a couple bales of hay every two weeks!  I'm also caught trying to train the baby bunnies to come to me right out of the nest box as soon as their eyes open (every litter). I can't resist these cute little bunnies.

I am the brains behind the genetics and planned litters. I take most of the pictures and videos and handle all the finances of the biz. My kids are infatuated with every single bunny and enjoy getting to hold the bunnies when allowed. Sometimes they even get to help water the bunnies.

at country bumpkin bunnies we adore our bunnies

'Rabbits have a subtle repertoire of body language to communicate so they don't draw attention to themselves. They use these signals to bond with their hutch mates, and the humans in their lives to say 'I love you'.
- Rosie Bescoby, animal behaviourist

All bunnies come with a Free Global Generic pedigree. We also have a custom bunny birth certificate available for a small fee...

WE’RE HERE TO HELP YOU WITH YOUR BUNNY.